This teenage girl lived in Southern California (near the beach) during the early 1960s:

These pages are fascinating because she simply wrote a daily account of her life in such a way that it gave me a story line to follow.

So far, I know that her best friend is Barbara and for an entire summer they went to a Miniature Golf Course in San Diego, California that appears to be family operated by a husband and wife and their two sons.  She appears to be in love with the oldest son, Malcolm.  He is introduced right away (in her 4th diary entry) when he slides into the vehicle with her and asks her how old she is.  He thinks that she’s in high school and quits talking to her when he realizes that . . . and that’s where she leaves me hanging because she doesn’t quite answer this question.

I’m going to assume that she is almost 15-years-old and about to enter into high school (something like that). Malcolm, on the other hand, is about to go away to college and her heart is breaking when she hears of this for the first time!  Meanwhile, Malcolm’s younger brother is showing an interest in her and she could care less.  Instead, her and her best friend Barbara sit on the counter a lot at this miniature golf course and often win 5 free games of golf at the last hole which brings them back night after night.

One time, the younger brother, Loren, asks if he could read her diary that she’s always talking about and she tells him, ‘no way’ while dangling the key that hangs around her neck.

(The exact key that kept this diary locked up like a time capsule!)

This diary is from an era that has long since passed – Like the time when she finds out where Malcolm lives and her and Barbara find themselves a block away after walking all the way there and then Barbara hides in the bushes when his parents drive by!  You can’t even make this stuff up!  This is an epic tale that merely needs to be filled in with the details of a good imagination. 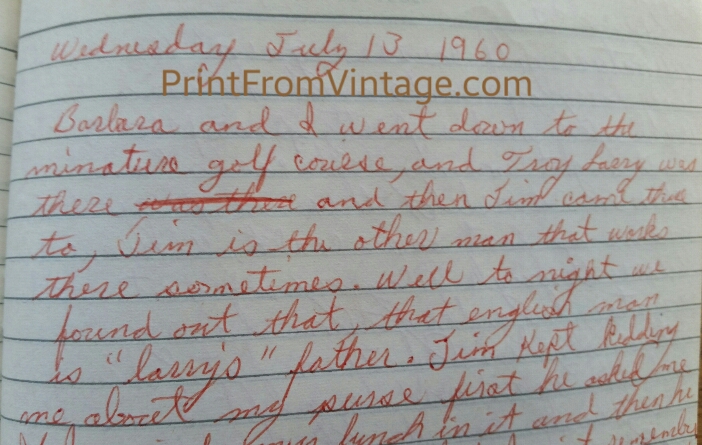 Why Are Old Diaries Worth So Much?

It’s simple, you are holding in your hand the ONLY copy.  For example:  if you are lucky enough to get your hands on a diary from someone in the Civil War, then you have something extremely valuable.  That is, it could contain a tidbit of historical value as well as a wealth of insight on some of these tragic events.  For that, people are spending thousand of dollars for one of these diaries!

However, these diaries by: Miss Norma are about her teenage life from the early 1960s and therefore, it contains some things that I hope we can still relate to today.