Famous Poet From 1800s Writes in THIS book that I got on ebay!

To begin with, I purchased an antique book copyrighted in 1845 about Elocution Philosophy (for $10) and I was intrigued when I found this handwritten poem on a back page with the title of it reading, 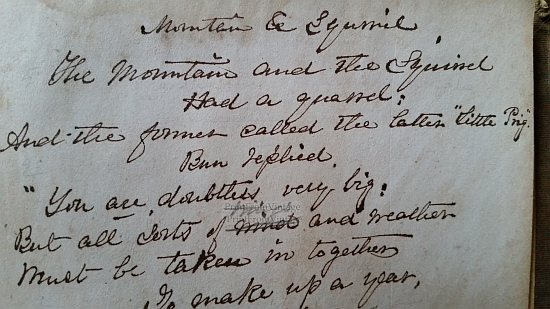 As it turns out, this is a very famous poem by Ralph Waldo Emerson published under a different title (Fable) from his book, Emerson’s Poems in 1846. Amazingly, this appears to be the rough draft of that famed “Fable” poem! The only differences between the two is the title and a significant correction that has been made on the 7th line of this page changing the word from mind to things! If this is so, then Ralph Waldo Emerson originally intended the poem to read, “But all sorts of MIND and weather” instead of the official publication that famously reads, “But all sorts of THINGS and weather.” Also, the copyright year of this book about Elocution Philosophy is 1845 and the poem “Fable” was officially published for the first time in 1846. This leads me to believe that the above poem was first scribbled in the back of this book sometime between 1845-1846 before its official publication in the year 1846. 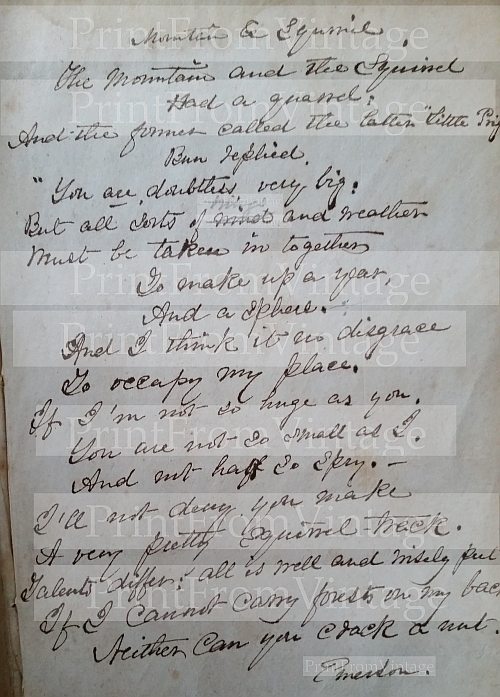 I was pretty excited and texted my research expert, Jazmin Mae, to get her input on this situation: 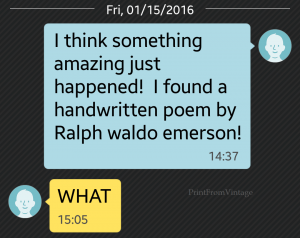 We then spent a significant amount of time researching the handwriting on this page above, but it was Jazmin Mae who discovered that it was not all penned by Ralph Waldo Emerson as I had originally thought. Needless to say, I was extremely disappointed! She said the the letter “s” was very different than any that Emerson himself would’ve handwritten. She was right; it WAS different. But what happened next, turned into an even bigger mystery that needed to be solved. First of all, to WHOM did this handwriting belong? And also, HOW did this person have access to a poem that wasn’t even published yet? We continued our research of this mystery and we believe that we have come to some significant conclusions.

First of all, I am huge fan of old books and I have noticed that often times people in those days treated their books as a notebook as well. Also, the owners of these books normally wrote their names on the front page and dated it. Therefore, I checked the front page of this book and it did have a name in it along with the year 1847.  For that reason, I believe that this book previously belonged to Ralph Waldo Emerson between the years of 1845-1846 (because he was an avid Lecturer and would’ve had the latest and greatest book about Elocution at that time) and soon thereafter, it was given to another soon-to-be famous poet. A poet named Lucy Larcom.