We call it a meme but of course there was no such thing back then. Just check out the use of the word “flashlight” to signify a photograph in this comic from 1921!

A “flashlight” means a photo:

Therefore, when we use the word “meme” today, we are talking about a phrase that was first coined by a fellow named Richard Dawkins in his 1976 book ‘The Selfish Gene’ in which he stated that a memes were “ideas that spread from brain to brain.” However, during these modern times, the Oxford English Dictionary defines memes as images, videos or text that are passed among internet users with apparent variations.

This meme was first published in Judge magazine in July 1921 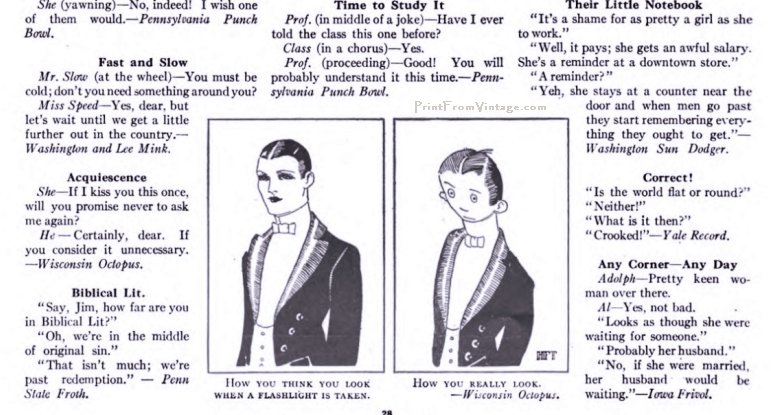 Therefore, a single image cannot be a meme. Only one that is copied and spread (or shared) with variations to the original image. In that way, they become a part of a creative collective that others get to enjoy either by relating to the meme or else, re-creating it with different variations. For example:

One internet user took the original meme above and substituted these words:

Therefore, one of these old comics, alone, is not a meme but when more than one is being printed in this same style, over and over again, it starts to take on the characterizes of a meme (in its earliest form) by using two panels and captions to create a contrast between expectation and reality. Here’s another example of a meme that came out in the early 1920’s in the Wisconsin Octopus:

As you can see, the set-up is the same. A two panel contrast between expectation and reality is made with words to describe each panel. In this way, we can see that the creators of these comics were way ahead of their time!