This appears to be a letter to a young lady who served in 1942 at a place in Canada called ‘Lakeview’ which was the home for many war time munitions plants during WWII. One large munitions factory in Lakeview was staffed by mostly women at that time. This is a letter from mother to daughter:

“By the way, what kind of Ad did you answer? There are two letters here now from strange soldier names.” 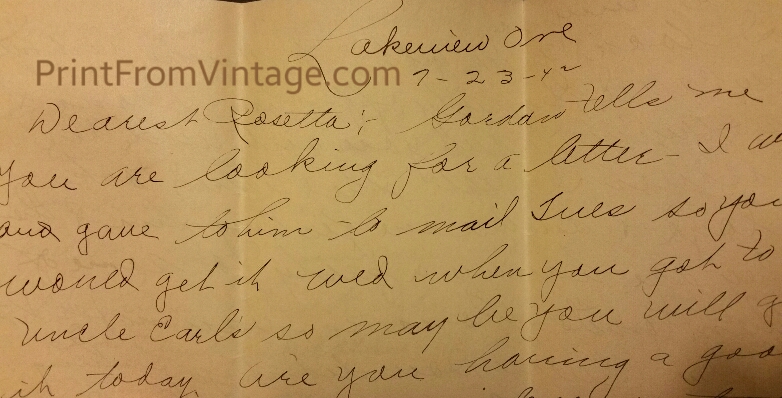 Gordon tells me you are looking for a letter – I wrote and gave to him to mail Tues so you would get it Wed when you got to Uncle Earl’s. So, maybe you will get it today. Are you having a good time? We got your letter yesterday. . .

. . .Grand Dad came over with Earl yesterday and stayed all nite with us. . .

. . .Dad and I went fishing Tues nite out by Bob Weir’s gate in Crooked Creek and I sure showed him up. I caught 4 – two of them 14 inches long and he only got one. I’m afraid he is going to Roaring Springs this evening so I’ll be alone till midnite or so.  I’m going to get my permanent this evening so I can’t go – don’t want to go there anyway. I took your gift to Wanda last nite She called the party off there. . .

. . .She and Alfred took Floyd and another one fishing Sun and then they are having a party for some of them tonite. Leona is leaving for it Sunday. Guess Dou didn’t go fishing thou. By the way, what kind of an ad did you answer – there are two letters here now from strange soldier names. One a Downs from March Field, the other a Beymer from Marco Calif. . .

. . .Wish I had brought my green stamp book up town with me and I would have sent it over with this and you could have got something with it. If you have time go in and look and see what they have for one book that we might like and maybe we can get it thru the mail. . .

. . .I still haven’t heard of any dance except at Westside. Was talking to Garrett the other day and someone at the theatre must have told him you got fired. I just let him think it. Tell Aunt Dorothy to save her sugar as I have my eye on some wild plums up by the laundry. . .

. . .Gordon says the Japs are watering them with poison water but we will chance that. . .

. . .P.S. Later – I went down home and got my stamp book. Pick out something nice. I like the blanket Grandma got but you do the choosing. Oh yes, I just saw Garrett and he said there is a dance at Eagle hall too.”