I have taken this information and developed my own method using my high powered mixer at home.

Start with an orange. 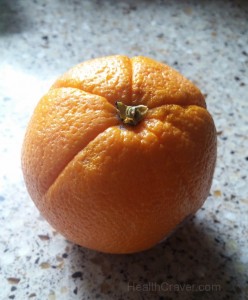 Please do NOT mistake orange juice from the store as a substitute for a real orange.  It is not.  I use one, real orange.  In the beginning, I used an actual juicer, but that was time consuming and most of the orange was left for the trash.  Later, I purchased a high powered blender that liquefies the entire orange instantly (after peeling the rind, of course) but in this way, you are getting all the fibers of the orange and not having to separately dispose of it, as you have to with a juicer.  I bought it as a Christmas gift for myself last year and it has been invaluable to me ever since!

So, what’s the catch?  There is none!  They do, however, offer one more bit of treatment that might make you uncomfortable.  That is, enemas twice daily. But believe it or not – you can do this on your own too!

However, it does promise that: ” An apparent increase in energy will be noted, which is caused by the body being free from the burden of encumbrance.  The mind power will be strengthened, and ordinary occupation may be pursued with increased vigor.  Deep Breathing excerises should be taken at this time.”

The best part about this treatment, however, is this:  “Physical culture exercises should not be used during the fasting period, as too much muscular tissue will be used up which will not be replaced until protein food is again taken.”

Another tip:  “More loss of weight will take place if the amount of water is kept to the minimum of tolerance.”

And finally, “Those attempting the reduction treatment at home without competent supervision may rest assured that two or three weeks of fasting will not be too long for perfect safety, and this length of fast may be broken without danger if the instructions are followed to the letter.”

For example, here are the instructions that he gives for a 67-year-old who weighed 208 pounds.  Her ankles hurt when she walked, and her legs were swollen with dropsical enlargement:

“Take the juice of one orange every two hours, with a glass of water each time.”

She continued for 30 days, during which time her weight was actually reduced to 168 pounds and after sustaining a healthy diet/exercise program afterwards, she reduced it to just 136 pounds at which time she had the appearance of a woman 20-30 years younger than she really was.  At age 75 she was doing well after her orange and water fast 8 years earlier.  Her skin was firm and pink as that of a young girl, and she was in excellent health!

Please note that this books seems to suggest a different approach to this fast from case to case.  For example, in this next case, Male, 35 years of age, a professional concert singer, weighing 229 pounds was advised to:

“Take a glass of orange juice three times daily, with the addition of a glass of plain water and one enema daily and also two cold water baths daily!”

This fast was continued for fifteen days, by which time the weight had been reduced to 198 pounds.

So, whatever the case, the key is citrus juice and water. Here’s how to do it: